With backdrops of green-patterned wallpaper and paint the color of flamingos, prints created for middle-class Americans from 1934 to 2000 are featured in Penn’s Arthur Ross Gallery exhibition, “From Studio to Doorstep,” until August 21.

The artwork is from Associated American Artists, a company founded in New York in 1934 with the intention of selling mail-order prints, providing an affordable alternative to the gallery model. The prints, signed and numbered in runs of 250, initially sold for $5 each. The works were created by artists, some of them well known, for $200 which was paid in advance.

“It was a whole new way to market art, meant to be shipped wherever people were across the country,” said Lynn Dolby, University Art Collection Manager and curator of the exposure. “These prints were not necessarily intended for the public of a museum; they were intended for the home and are on a very intimate scale.

The 37 prints in the exhibition come from nearly 100 in the Penn Art Collection and most have never been exhibited before. Many were donated by the late Anne Jaffe Portenar, C’49, and her husband, Myron A. Portenar. Anne Portenar and the firm’s artistic director, Sylvan Cole, had been friends for three decades and she credits him for sparking her interest in collecting prints, Ms Dolby said.

The gallery’s entrance wall is covered with a green and white wallpaper Ms. Dolby had made, recreating a pattern sold by Associated American Artists in 1953 designed by artist Arnold Blanch. A print of an abstract floral paintograph, also from 1953, “Floral Magic”, by Mr. Blanch hangs there. “I thought we had to put them together for this entrance wall,” Ms. Dolby said.

Also in the entrance is the exhibition’s only artist’s proof, “Grey Nude”, a 1953 woodcut by Milton Avery. “It’s interesting to see an artist’s proof and see what the original looked like,” Ms. Dolby said. “We are very lucky to have this in the collection.” Media vary, including woodcut, etching, linocut, etching, aquatint, and lithograph.

Some of the gallery walls are painted in the mid-century color “Pink Flamingo”, which Ms. Dolby chose as a nod to the period and also as a contrasting backdrop to the mostly black and white prints.

Advertisements that appeared in popular magazines of the time, touting the price of $5—about $88 today—and encouraging groupings of multiple prints to decorate the home, are also featured. Although early adverts appeared aimed at white, middle-class audiences, Ms. Dolby said, the performers were of different races and ethnicities. For example, this exhibit includes prints by five Mexican artists.

“From Studio to Doorstep” is the 11th exhibition since 2010 created with works from the Penn Art Collection and the first curated by Ms. Dolby. Two students from the College of Arts and Sciences participated in the preparation and promotion of the exhibition as interns. Rising sophomore Zoe Vaz with the Art Collection team and rising junior Xiaoyan (Sunny) Hua with the Arthur Ross Gallery team participated with funding from the Summer Internship Program in humanities administered by the Center for Undergraduate Research and Scholarships.

The exhibit is organized roughly chronologically, beginning with “The Balers,” a 1934 etching by George Elmer Browne, and moving through a 1986 lithograph by Clinton Adams, “Still Life with Quotations.” The company ceased operations in 2000.

The company also wanted to educate its consumers. The prints were therefore accompanied by a label explaining the artist a little, as well as a certificate of authenticity signed by the artist. Ms. Dolby has included images of these, where available, along with the artwork.

The centerpiece image of the exhibition is a 1972 print, “Home Run,” by Stanley Kaplan, which shows a baseball player swinging his bat. “It’s such a summer picture,” she said. “It’s very American.” 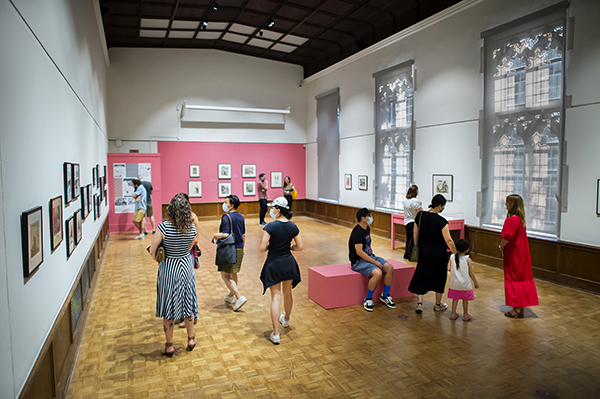 But his favorite is a 1937 lithograph by one of the most famous artists depicted, Thomas Hart Benton, is the “Goin’ Home” print, created from a drawing of a family in a horse-drawn cart. horses he performed in 1928 in North Carolina. Smoky mountains.

“I love the images, the nostalgia of a horse-drawn carriage,” she said. “And I think the fact that the pilot turns his back on us, he becomes a bit like everyone else. It’s a very familiar theme. I love this piece.

This article was adapted from a Penn today Article by Louisa Shepard, July 13, 2022.