RISC-V IP leader SiFive announced that it has raised $175 million in Series F funding from Coatue, which values ​​the company at more than $2.5 billion. Earlier this week, SiFive sold its OpenFive SoC design business to AlphaWave for $210 million.

SiFive announced a $175 million Series F funding round led by Coatue Management, adding to previous rounds for a total of more than $350 million raised since the company was founded in 2016. Developer RISC- V core IP is now valued at $2.5 billion, half a billion more than last year’s valuation when Intel tried but then abandoned an acquisition of the company. Earlier this week, Canadian semiconductor IP designer Alphawave announced that it had acquired SiFive’s OpenFive RISC-V SoC design business for $210 million (see below).

SiFive will use the new funds to invest in global hiring, new product development and the RISC-V software ecosystem. The Silicon Valley company says it has won design contracts with more than 100 customers, including eight of the top 10 semiconductor companies, in applications including automotive, AR/VR, client computing , data centers and intelligent edge devices. 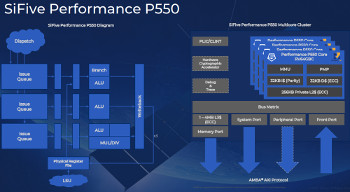 SiFive’s announcement includes testimony from Intel noting that its previously announced Horse Creek development platform based on SiFive’s Cortex-A75, RISC-V RV64GC Performance P550 core will be widely available in late 2022, built with the technology of Intel 4 (7nm) process. In December, SiFive announced a 21G3 version of its RISC-V cores, including a new integrated and targeted “Essential 6-Series” featuring the Linux-ready 64-bit U64 and a similar U64-MC designed for quad-core SoCs. .

“The market has spoken and made it clear that RISC-V computing will compete for the core of all future computing platforms,” ​​said Patrick Little, President and CEO of SiFive. “As the founder and market leader of RISC-V computing, our role is to advance this ecosystem and provide customers with an advanced computing alternative to Arm and others.”

By dropping OpenFive, SiFive is doubling down on its core IP rather than system-on-chip IP development. SiFive has designed SoCs such as its Cortex-A55 like the U74-MC SoC used on the HiFive Unmatched SBC. In this way, it follows the path of Arm, which leaves SoC designs to its customers. (The exception is an Arm Total Solutions for IoT program in which it develops Arm Corstone system-on-chip reference designs for smaller customers.) Now that Nvidia has canceled its attempted acquisition of Arm, major customers of company’s semiconductors no longer have to worry that Arm will become a SoC competitor.

The OpenFive business unit was launched by SiFive in September 2020 with the task of enabling “customizable silicon-centric solutions with differentiated IP”. In April last year, OpenFive announced that it had successfully completed the tape release of an upcoming MCU-like SoC using TSMC’s 5nm N5 process.

The acquisition of OpenFive will nearly double the number of connectivity-focused IPs available to Alphawave customers from 80 to over 155″ and provide customers with a one-stop-shop for their bundled connectivity needs in the most advanced technologies. at 5nm, 4nm, 3nm and beyond,” says Alphawave. The IP will include “an expanded die-to-die connectivity portfolio that will accelerate capabilities to deliver chips to customers.” Alphawave’s customer base to grow from the current 20 to over 75, including a new hyperscaler customer based in North America.

The two companies have been partners since the creation of SiFive. Over the past two decades, AlphaWave has developed IP SoC technologies for Arm clients and, more recently, RISC-V. For more information on AlphaWave and details on the OpenWave sale, see here BusinessInsider story.